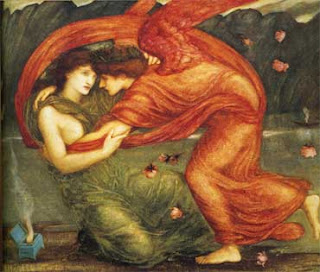 I have been decorating the house like mad, since tonight Glen and I are hosting a Valentine’s Ball. The decor involves silky sari cloth in rich colors, little silken nooks out of pre-Raphealite paintings, sparkling lights and votives, big sparkly red hearts. There is something extremely liberating about all this, sobering in light of the fact that in some places in the world, one could be jailed for wearing red on Valentine’s Day.

This is probably the first mega-party we’ve ever thrown that wasn’t for Halloween/Samhain/my birthday. It’s very different kind of fun, and it fits the season—the whiteness of the snow suddenly seeming dramatic, somehow indulgent, more sensuous than stark, the murmurings among the birds hinting at matings to come, the thaw of Imbolc, just two weeks ago now, almost imperceptibly spreading further along. . .

The idea for a party was spurred by the Valentine’s dinners thrown by Julia Child and her husband, which I noticed in Julie and Julia. Soon enough the party planning took on a life of its own, as others got involved; by now it is delightfully ambitious in scope, profoundly fun, and very spiritual, in its campy/erotic/delightfully sensual way. After all, Valentine’s Day’s date of Feb. 14 descends from the big Roman festival of Lupercalia, an ancient erotic celebration in honor of the fertility of the goddess and the time of mating (also, as the name implies, with a connection to the legendary goddess-like wolf who nurtured Romulus and Remus).

This goddess connection has burgeoned from idea to image as the party has taken shape. We will have Valentine-colored foods, and goddess images scattered about—but, my daughter and I agree, they have to be happy ones ( she nixed William Morris’s “Pomona”). I had the idea to crown the buffet table with a statue of Aphrodite, and looked all over the internet for an appropriate Venus de Milo. Luckily, none of them were the right size, quality, or price, so I ended up with one I like much better, since she not only has all her arms and fingers, but is surrounded by doves into the bargain. There will be other fertility goddesses and gods, a Shiva, and of course plenty of big fat red hearts—by many lights, a primal ancient symbol of the yoni, vulva, or goddess generally.

In honor partly of my delightful friends from Iran and their tradition of poetry circles, there will be also “love poetry corner,” where guests will post copies of favorite love poems they’ve copied out, and maybe give poetry readings (this was a compromise with those who felt that the last thing we want to do is interrupt the dancing for a poetry reading!)

All these preparations mixed in with an already very busy (!) life have meant less time than usual to write my annual Valentine poem for my sweetie. I know I’ll finish something in time, but meanwhile, here’s “Paravaledellentine” from Calendars:

To Arouse Secrets: The Visceral Magic of Robert Rauschenberg
The Valentine’s Ball: Where the Goddess and Poetry Meet
Share this content instantly via the share buttons. Thanks for spreading the word!