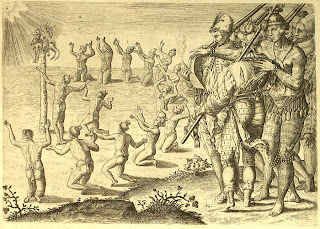 I confess:  for many years I have not found it easy, as a comfortably affluent European American, to feel the deep and thorough gratitude I would like to feel at Thanksgiving.  I’ve tried, but not very far down I keep hitting some kind of obstacle.  This year, I was provided with two powerful and apparently contradictory texts that may point a way out of the impasse.  The first is a wonderful and profoundly true meditation on gratitude that was handed out at a Thanksgiving yoga class I took this morning. It is worth reading slowly, with contemplation:

“Gratitude unlocks the fullness of life. It turns what we have into enough, and more. It turns denial into acceptance, chaos to order, confusion to clarity. It can turn a meal into a feast, a house into a home, a stranger into a friend. Gratitude makes sense of our past, brings peace for today, and creates a vision for tomorrow.” —Melody BeattieThe second was writer Alma Luz Villanueva‘s Thanksgiving Facebook link to a classic article I’ve read before, but which only really hit me today, perhaps because I recently visited St. Augustine, Florida, where the genocidal impact of the Spanish on the Timucua people was still palpable: “One indication of moral progress in the United States would be the replacement of Thanksgiving Day and its self-indulgent family feasting with a National Day of Atonement accompanied by a self-reflective collective fasting.  In fact, indigenous people have offered such a model; since 1970 they have marked the fourth Thursday of November as a Day of Mourning in a spiritual/political ceremony on Coles Hill overlooking Plymouth Rock, Mass., one of the early sites of the European invasion of the Americas.. . . Simply put: Thanksgiving is the day when the dominant white culture (and, sadly, most of the rest of the nonwhite but non-indigenous population) celebrates the beginning of a genocide that was, in fact, blessed by the men we hold up as our heroic founding fathers.” —from “No Thanks to Thanksgiving” by Robert Jensen (please read the whole of this powerful short article here).How to reconcile these two takes on the holiday? How to open myself to gratitude and also open myself to a truth that I fear will lead to terrible shame and guilt and grief? I can’t feel gratitude for the horrible sins of my European ancestors. And yet, how can I exempt such a huge part of my cultural identity from my consciousness and still expect to find the peace within myself from which gratitude arises?Perhaps the shadow knows. A third text arrived in my life today that seems to point to an answer:   The Dark Side of the Light Chasers: Reclaiming your power, creativity, brilliance, and dreams by Debbie Ford.  Ford recounts how she faced her shadow racist self (this was a deep shadow, that of a person no-one would EVER think to call a racist, and consequently a difficult but ultimately very transformative self to connect with), and the profound and immediate—really almost miraculous—external effect of that inner work.

Our shadows consist of the parts of ourselves that we disavow and repress.  I have been having written conversation with my shadow self (I write both parts, but she definitely has her own voice) for several weeks, inspired by discussion in a therapeutic writing group I am part of at the Center for Creative Healing.  Mine was angry with me at first, perhaps because she’d been neglected for so long, but I waited that out and ended up benefiting profoundly from her insightful answers to questions and problems from all areas of my life.

I found I could ask her anything–after all, who knows me better than my shadow? Family issues, career issues, decorating advice…she was right every time.  Now I am planning to take our relationship to a deeper level, and to see if this could be the answer, the way that i as a European American can begin to come to terms with the guilt and horror that I feel when I think about the fate of the Native American people on this continent. I am going to read Ford’s book carefully and meditate on this question. I am going to see if I can honestly accept my own shadow’s acquiescence in the vicious conquest of this continent, so that I may begin to move towards atonement.That would be where the gratitude comes in; that could be the way to reconcile Beattie’s truth with Jensen’s truth. I have been projecting my own shadow conquerer out onto others, demonizing imperialism and militarism when I encounter them in others. But I won’t be truly free of them until I encounter them within myself. Every encounter with the shadow is a potential teacher, a potential opener, and so, in the small hours of this Thanksgiving night, I give thanks for the shadow. As Ford writes, “You must go into the dark in order to bring forth your light. When we suppress any feeling or impulse, we are also suppressing its polar opposite. If we deny our ugliness, we lessen our beauty. If we deny our fear, we minimize our courage. If we deny our greed, we also reduce our generosity. Our full magnitude is more than most of us can ever imagine.”Image:  Timucua Harvest Ceremony

Eclipse, Solstice, Yule, Blogaversary, Carols: Thoughts on Creativity and Recurrence
Medieval Wind Power
Share this content instantly via the share buttons. Thanks for spreading the word!