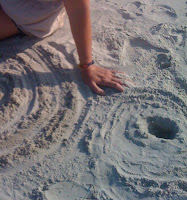 Mabon was glorious this year.  For the first time, I cast a circle by using the invocations to the directions I wrote to structure my new book of poems.  It has taken me two years to get up the courage to use these invocations, maybe because I was so afraid they would sound forced instead of magickal.

But they did sound magickal; they worked!

Compared to a normal circle, where we just improvise our invocations according to the spirit of the moment, this time I felt a significant difference: the circle was much more tangible. What a special feeling to create a magic space out of words you have crafted; it reminds me of how I felt after writing the Rune poem in the ancient Celtic form of Rionnard tri-nard.

Later, Glen and I went to the beach, where I thought about Andy Goldsworthy, one of my favorite artists, as I found myself crafting spirals and tunnels. Then we walked along the beach and found that other humans had left very similar traces–more sacred circles, silently invoking their own sets of four directions.

We humans are amazing creatures!

On Yoga, Sprawl, and the Black Earth Institute
A Chant for Lammas and My Garden
Share this content instantly via the share buttons. Thanks for spreading the word!