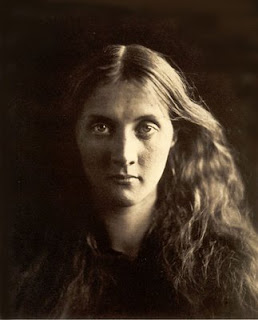 I picked up a copy of an odd book at a library sale over the holiday weekend: Ethel Morton at Chautauqua, by Mabell S.C. Smith, published just about a century ago, in 1915.

It’s an eye-opener to see what things were considered wild and modern at that time:  not only airplanes and electric lights, but also learning to swim, kids earning money (considered “commercialism” and cause for concern among parents), and girls wanting to be considered “individuals” :
“[Helen] was too young to realize it, but it was the cry of her time that she was trying to express—the cry of the woman to be considered as separate as the man, to be an individual.” (p. 106)

These Julia Margaret Cameron photographs of girls are beautiful.  They also strike me as sad, and I don’t think it’s just the slow-lensed technology.  As Ethel Morton at Chautauqua reminds me, in Cameron’s day, girls were even more imprisoned and their parents far stricter than they would be in Ethel’s day; there’s an extended discussion in the book of how they are less strict in 1915 than in previous generations.

When I look at the faces of Cameron’s women with their open eyes and flowing hair, in a way they remind me of women I know now, so many sensitive and beautiful women I have met in my various spiritual groups and endeavors, all working on strengthening ourselves, healing from the past—sometimes from many generations of the past—and becoming stronger, happier, and freer human beings.

I like to think that we are doing it, on some level, for them.  Not only for ourselves, but for all those women before us, equally complex and sensitive, who had so much more to contend with than we do, for whom sexism, sexual abuse, and limited opportunity were so much more daunting, who literally did not have, most of them, the power we have to be free human beings.

The big difference is that for most middle class women now, even with financial and other responsibilities, the main thing holding us back on our path is ourselves.  As Cara, one of the women in my coven, said recently:  “to take as good care of ourselves as we would of someone else–what a radical idea!”

Radical, and the necessary next step.   So, for those of us who are still afraid of being “selfish,”let’s do it not just for ourselves but for Helen, for Ethel, for those sometimes sad looking, long-gone-but-still-here sisters in the photographs.