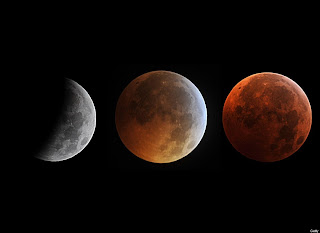 What a special, special Solstice night.  My daughter and I, in rooms at two ends of the house, were both awakened at around 2:40 AM (just as, it turns out, the eclipse was heading into its fullness) by what seems to have been an identical feeling:  a warm rush of happiness entering through the crowns of our heads.  I lay there for a while and felt the world, in every detail and in every commonality, united in a harmony of unity and love. Soon I went downstairs to look for the moon, which had been full and clear when I went to bed.  It was hidden by clouds, but I stayed there, mindful of astrologer Gretchen Lawlor‘s words in an email to me yesterday evening: ” I’ve just realized it is important, at some time during this eclipse to stand up and feel the alignment, be part of the drama, another channel for the light. When you stand, the Earth and past it the Sun will be in alignment beneath your feet, and the Moon directly overhead, at your crown. Even if it’s cloudy and we cannot see it.”  I stood and felt the channel, exactly as she had described it.


How different from last year’s solstice celebration, described in the very first post on American Witch, which was also wonderful in a completely different way.  That was rousing, external and solar, this one, so far, peaceful, internal and lunar.  But each, incontrovertible.  I love how being a Wiccan gives me so much flexibility to find the Spirit how and why I need to find it.  This year we will also be partaking in many of the traditions of last year, but there is so much space for creativity every year as well. What will we be doing? Will I finish my own solstice carol? I know I will be posting here, soon, my new versions of Christmas carols, invented during a concert this weekend and suitable for Goddess-believers to sing along!

This morning, Starhawk is featured in an essay for the Washington Post, and also quoted in an article on this singular confluence of astrological events–the second in 2000 years:  “But for Wiccans, astrologists and others, Starhawk wrote, the coincidence offers an opportunity to “step out of time. We are free of the past, and we can consciously create the future, for ourselves, for our communities, for the earth.””

Creativity is, by definition, about stepping out of time.  And yet it is time that connects with it, inspires it, feeds it, stimulates it and gives it the otherness it needs to grow.  Just as, in a line of poetry, the words and the rhythm interact, so my own creative newnesses interact with the recurrences of time:  the dawns, the moons, the Solstices and the whole Wheel of the Year.  It does so often spontaneously and unpredictably, as befits a type B blood type—but that’s all the more reason I treasure the recurrences that are there.

I remember the feeling of excitement I had last year, just after Yule, to be starting this blog; I was a little scared to begin “coming out” as a Wiccan, stepping out into the moonlight, as it were.   A year later, here’s Starhawk being quoted matter-of-factly in the Post.  In many ways (not least, Senate candidate Christine ODonnell’s widely-noticed, inadvertent video advertisement for Wicca), it’s been a year of mounting energy for Wiccans, ending with this awe-inspiring solstice eclipse, this twice in 2000 years moment of realignment betweeen the feminine and masculine energies.

It’s also been an inspiring year of blogging for you all.  Thank you, each one, for reading and sharing American Witch and for all your comments, good wishes, and support.  I love hearing from you and knowing you are here with me on this blogging adventure! Thanks also for the wonderful Solstice poems; it will be an annual call, so if you didn’t send one in and would like to, you can get to work on next year’s Yule poem.  For inspiration, you could check out these new Christmas carols (some very beautiful) solicited by Britain’s poet laureate Carol Ann Duffy, and also these incredible photos of last night’s solstice eclipse.